Haliburton Forest is proud to announce the arrival of six new wolf pups !

On Tuesday May 3rd 2016, Luna (our Alpha Female) did not show up for her usual social interactions with the rest of the pack. Even a small feeding did not entice her to show up! Our Wolf Centre staff noticed her conspicuous absence, and after 20 years of experience, we knew that this could only mean one thing. Not to mention that the timing was dead on: precisely 63 days after we observed mating in early-March, which is the gestation period for dogs and wolves we could expect to have another litter of pups. 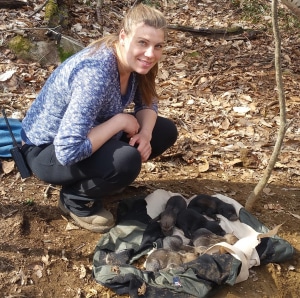 On Wednesday May 4th, we mustered our crew of eight staff and divided into several groups to take care of our annual maintenance. This included cleaning the windows of the observation rooms, cutting trees that had fallen on the fence, collecting bones in the feeding area, and of course, searching for the newborn pups. 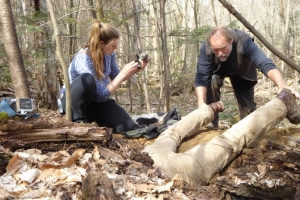 In the past, it has sometimes taken us up to three and even four hours to find the den where the Alpha Female chose to give birth. This is because our wolf pack has inhabited the 15 acre enclosure for over 20 years, which means that there are dozens of holes that could serve as den. But one feature that makes the finding of an active den easier is the sound that the pups make: a high pitched, constant wailing, which can be very clearly heard in the vicinity of the den. 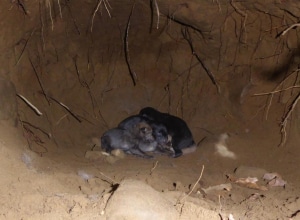 Experience was on our side this time, and within 10 minutes we heard that distinctive whimpering coming from a hole in the ground. As usual, Luna, the mother had vacated the den prior to our arrival –  her natural fear of man, which is inherent to wolves, is stronger than her sense to protect her pups. These were barely one day old, and still had their umbilical cords attached! The den was a deep one, reaching nearly 8’ underground.

One person squirmed into the den and pulled out the pups, while another identified their sex and colour. The third did a second inspection and placed them on a warm blanket. Then we reversed the procedure and put them back into the den. The entire process took barely 10 minutes. For much of this time, Luna was observing us from a safe distance on a ridge above us, watching our every move. 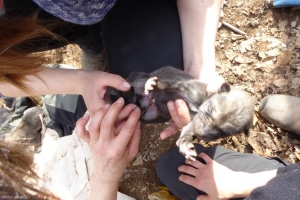 We counted six pups: four males and two females. With the pack already including eight adult wolves, six pups would put too much stress on the group. For this reason, and to support wolf research at other facilities, we will be donating two pups (one male and one female) to the International Wolf Science Centre in Austria. We are currently preparing the paperwork and getting their passports ready. In about two weeks we will re-enter the enclosure to retrieve the two pups and prepare them for their journey to Austria!

Check out the photos and the video of our excursion into the Wolf Centre enclosure, and listen to the soundbite of the pups whimpering (in the video where the pups are shown in their den).

If you are interested to find out more about the new home of two of our pups, you can read about the International Wolf Science Centre at: http://www.wolfscience.at/en.

PS: This blog post was a truely collaborative work: 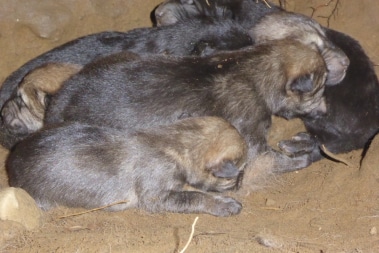 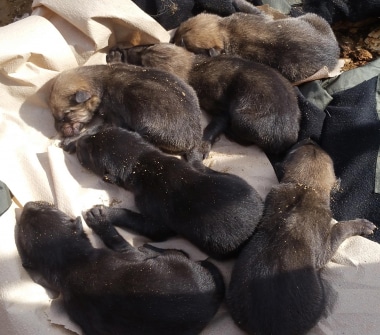 Best trail conditions this season on the Wild Wood

The Wild Woods Walk was panned this morning for sn

We have snow!  We staked some lakes (very slushy)

Never know who you will meet on the trails at #Hal

🎣💥 Look who was out #icefishing at Haliburt

Mondays be like at Haliburton Forest & Wild Life Reserve With all this fresh snow, we are talking at minimum 5 inches, where else would you rather be?! That is, of course, if you are into winter! We sure are! ... See MoreSee Less

We use cookies on our website to give you the most relevant experience by remembering your preferences and repeat visits. By clicking “Accept All”, you consent to the use of ALL the cookies. However, you may visit "Cookie Settings" to provide a controlled consent.
Cookie SettingsAccept All
Manage consent

This website uses cookies to improve your experience while you navigate through the website. Out of these, the cookies that are categorized as necessary are stored on your browser as they are essential for the working of basic functionalities of the website. We also use third-party cookies that help us analyze and understand how you use this website. These cookies will be stored in your browser only with your consent. You also have the option to opt-out of these cookies. But opting out of some of these cookies may affect your browsing experience.
Necessary Always Enabled
Necessary cookies are absolutely essential for the website to function properly. These cookies ensure basic functionalities and security features of the website, anonymously.
Functional
Functional cookies help to perform certain functionalities like sharing the content of the website on social media platforms, collect feedbacks, and other third-party features.
Performance
Performance cookies are used to understand and analyze the key performance indexes of the website which helps in delivering a better user experience for the visitors.
Analytics
Analytical cookies are used to understand how visitors interact with the website. These cookies help provide information on metrics the number of visitors, bounce rate, traffic source, etc.
Advertisement
Advertisement cookies are used to provide visitors with relevant ads and marketing campaigns. These cookies track visitors across websites and collect information to provide customized ads.
Others
Other uncategorized cookies are those that are being analyzed and have not been classified into a category as yet.
SAVE & ACCEPT
Contact Us