Haliburton Forest’s vast 80,000 acres offers all sorts of variety for visitors – from different habitats to levels of privacy, elevation and especially species.

One species in particular has not been observed by staff for a few years but has returned this year to the northern part of the property! This is the gray jay (Perisoreus canadensis), one of the few birds which does not migrate south in the winter. The northern part of Haliburton Forest represents the southern edge of this cheeky, tough little bird’s range today. Historically, however, fossil evidence places gray jays and other boreal species in Tennessee about 18,000 years ago, indicating a much cooler climate than we experience today. Gray jays are built to sustain cold winters with thick, fluffy plumage that covers their entire body, even their nostrils! They incubate eggs in temperatures as low as -28 degrees C and the chicks are then born in early April. 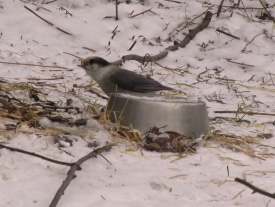 The gray jay has earned the playful nickname of “Whiskeyjack” which is derived from the Algonquian Indian term Wisakajack, meaning a mischievous spirit known to play tricks on people. These ‘tricks’ are likely due to the social nature of the bird which is centered around greed or hunger. Gray jays frequently visit campsites, commonly landing right on campers’ hands. This wows the beholder, distracting them long enough for the bird to steal some morsels of food which it then stores for consumption in winter. It will produce sticky saliva to secure food in tree crevasses, always above the impending snow line for easy access when food is scarce. In the photos here, we can see individuals nabbing kibble from some of the hunting hounds and scavenging part of a deer hide, taking advantage of the recent hunting season here at the Forest. Gray jays will eat just about anything and can be helpful in their voraciousness; one observation reports perching on the backs of moose, consuming blood-filled ticks which can be quite dangerous (even deadly) for the large ungulate.

Next time you visit Haliburton Forest, be sure to enjoy the northern areas of our great property. They are much more private and rugged than the south (if you can believe it!) and you just may spot one of these beautiful, interesting birds; forming a neat observational story of your own. Be sure to share it with us, we love hearing about the awesome adventures of our guests!

Make sure this account has posts available on instagram.com.