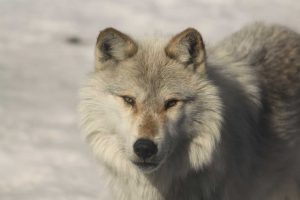 Within its boundaries nature coexists and in many cases abounds with every aspect of human involvement from recreational use to timber harvests. And, yes we have wolves. Canis lupus, although elusive, can still be seen and heard. Two to three wild packs and a few lone wolves run and hunt in our forests. But more easily seen and heard is our captive pack of Grey Wolves enclosed in a 15 acre facility.

The origin of the Haliburton Forest wolf pack take us back to 1977, when two unrelated wolf pups were acquired by Jim Wuepper, then residing in Marquette, Michigan. Jim was a professional photographer who acquired the wolves with the intention of photographing these fascinating animals in a natural setting. Also involved in his wolf project was the University of Upper Michigan. The pups were taken to Michigan’s Upper Peninsula and named Showano and Brigit. All three, including the first offspring from these two wolves, a female named Denali, became celebrities when they were featured in the book “In Praise of Wolves” by naturalist and author R.D. Lawrence. A decade later it in turn became the basis for a documentary about the clebrated writer.

In subsequent years the pack grew and declined, as would be the case under natural conditions. They inhabited a large, 8 acre enclosure and provided ample opportunity for research and photography. It was not the intent to commercialize the animals and therefore later generations in the pack were not socialized – meaning they were not acquainted to humans to the point of losing their fears or regarding their human companions as pack members.

In 1991 Jim Wuepper, after having worked with wolves for the better part of his life, foresaw that personal changes would result in his inability to properly care for the pack. He was faced with making the tough choice between three alternatives: liquidating his praised setting by killing the wolves: breaking up the pack and giving individual animals to other licensed facilities: or, finding a suitable place for the whole pack. While the last alternative was the least likely to materialize, it was by far the preferred option.

Jim had been aware of Haliburton Forest for a number of years through his acquaintance with R.D. Lawrence, who lived in Haliburton. Ron Lawrence knew the staff personally and appreciated and shared their sound, sustainable approach towards resource management. As a wolf expert, he was also involved in the early development of an outdoor education program there. To him, Haliburton Forest could offer eveything that his wolves could ask for and likewise, he saw the wolves as a potential, outstanding asset within Haliburton Forest’s framework of research and education. In 1992 Haliburton Forest’s staff committed themselves to taking on the project of transferring the Michigan pack to Haliburton.

In 1992 the Grey (or Timber) Wolf was listed as an endangered species in the United States. This subjects any acquisition or transfer of wolves to the very stringent CITES (Convention on International Trade of Endangered Species) regulations. It took months for the appropriate permits to be issued after state as well as federal wildlife departments were assured of the appropriateness of the transfer of this pack to Ontario. On the other hand, wolves are not endangered in Canada and are actually quite plentiful in northern portions of this country. They are therefore not subject to any control, as long as they are not of local (the same province) origin. However, escape of these “foreign” wolves was addressed and is clearly reflected in the extent of fencing, gating and accessing of the Haliburton Forest compound area. 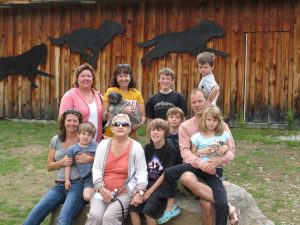 Finally, in September of 1993, a 15 acre enclosure was completed, which coincided with the issuing of all permits required to the transfer of the animals. The moving date was set for October 12th and preparations for the “big day” commenced.

On the day of transfer, there were on site in Michigan: three veterinarians, a DNR wolf expert, three marksmen with tranquillizer guns as well as several helpers – a total of 14 people. It took over four hours to capture the five wolves and have them crated for immediate transport to Ontario. While they were tranquillized, DNA as well as blood testing occurred in order to document the status of the animals for future reference. During the transport the wolves slowly awoke from their sleep. The only hold-up occurred at the border when customs officials could not locate “wolves” in their GST-manual and were uncertain if regulations for “commercial goods” would apply.

Eleven hours after leaving their old home, the wolves were released into the Haliburton Forest enclosure.

The wolves readily took to their new home and in the following 2 spring seasons produced 2 litters of pups. In December of 1995 a young male wolf, Trats was loaned to Laurentian University in Sudbury for research purposes. This wolf was introduced to a young female wolf and sometime during the late spring of 1996 they mated. This new Alpha pair (Wen and Trats) along with a niece to the female (Niaga) were transferred back to Haliburton Forest in July of 1996 to form the core of the future pack.

Snowmobiling a family sport? Of course it is! It i

Today's the day! We are happy to welcome our first

Happy Valentines Day from all of us @haliburton_fo

Happy Forest Feature FRIDAY! That day of the week

We are thrilled to be able to reopen the Wolf Cent