A visit to the Wolf Science Centre near Vienna, Austria

Catching up with friends – 2 and 4-legged.

In mid November 2016 we visited the Wolf Science Centre near Vienna, Austria. We had a standing invitation from Dr. Friederike Range, one of the founders and principals of the Centre. In 2012 and again in May 2016 two of Haliburton Forest’s wolf pups were sent to Vienna to populate the centre’s wolf packs. The Wolf Science Center’s mission is to conduct internationally recognised, first-class research on the behaviour and cognition of wolves and dogs, as well as of the interspecific relationships we share with them as humans. 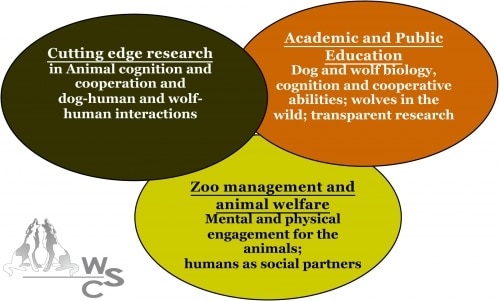 Their approach is intriguing and different from any work on wolves and dogs conducted on this globe. Looking through the shelves of German-speaking bookstores on dogs and wolves, publications from the Wolf Science Centre are prominent. And increasingly they are translated into other languages. 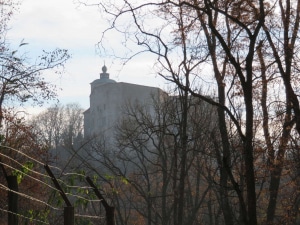 When we visited the facilities in November, the warm, sunny weather was hardly fall-like. Embedded into a wildlife park below a stately castle in the Austrian countryside north of Vienna, the Wolf Science Centre started from humble beginnings. It was the idea of 3 committed, young academics back in 2008 who wanted to reassess the relationship between wolves, dogs and humans. They especially wanted to address some of our conceptions of wolves and how their domesticated offspring, the dog, relates to its ancestor and its new master.

Today the working practices at the Wolf Science Centre are based on the understanding that animals are our partners, and are deserving of respectful handling and state-of-the-art keeping. They also aim to provide science-based information to the public in order to advance the cohabitation of wolves, dogs and humans worldwide, for the benefit of all parties. These are the self proclaimed goals of the centre, which we wanted to see in action. 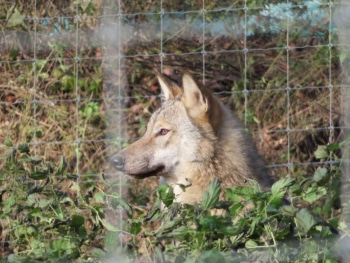 And of course we also wanted to visit “our” pups, the animals which left Haliburton Forest only a few months prior and now make Austria their home. We were greeted by Dr. Range and briefly also by Kurt Kotrschal, one of Dr. Range’s colleagues and one of the three original founders of the centre. Dr. Kotrschal was then called away. He had a media assignment, one of many, since the Wolf Science Centre and its work is attracting much media attention.

Finally we were joined by Marleen Hentrup, an old acquaintance, since she has visited Haliburton Forest already in 2012, when the first set of pups was transferred to Austria. But more about this later.

Ms. Hentrup is the trained  and experienced “dog-trainer”, rather “wolf-trainer”, charged with the raising and training of all wolf pups that arrive at the centre.  She accompanied us on our tour through the centre and commented on many of the animals we encountered. In total 34 canids live at the Wolf Science Centre: 17 wolves of different ages, sexes and origins and 17 dogs of a similar mix. None of the latter are pure-bred and all from pounds. 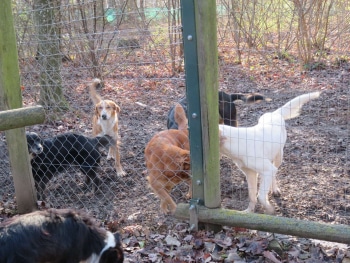 All animals are organized in packs, ranging from 2 to 7 animals in size. Every pack has its own enclosure, each approximately an acre in size. All animals are within sight of each other and in order to avoid each pack becoming too comfortable in their respective pen, these are being changed on a regular basis. Most pens are also equipped with sorting yards, double doors and moving facilities. The biggest difference between the Haliburton Forest wolves and those at the Wolf Science Centre is their socialization status. Haliburton Forest’s animals are “unsocialised”, to the point where they are driven by instinct, and that is on purpose. Visitors shall experience a pack as “natural” as in the wild, with all features defining a wolf pack intact.

The Vienna wolves – and dogs for that matter – are totally socialized, to the point where they appear like pets, just like their domestic relatives, the dogs. And that is the purpose, to compare, in their behavioural studies apples with apples, domestic wolf with domestic dog and not, as in many other studies, canids of varying states of domestication. The Wolf Science Centre’s vision in this respect is spelled out as follows:

Our research and other activities shall contribute to the propagation of a society in which decision making is well informed. Based on scientific knowledge of animals’ behavioural needs and of their cognitive and emotional capabilities, such decisions would be founded on an intrinsic respect for animals as partners in research. Our scientific contribution explores wolves, dogs, and their long-standing relationship with humans, and will directly contribute to this pool of knowledge, thereby helping to develop a more adequate and respectful attitude towards these animals. In a better world for wolves, humans and dogs, this understanding will support the well-being as well as protecting of canines in the wild and in human custody.

The walk along the paths between the various enclosures confirmed the purpose of this fundamental research. All of the facilities and every process is well thought through, aimed at an academic, scientific purpose.

One of the highlights of the visit was the direct interaction with the two Haliburton Forest pups born here in late April. By the time we saw them again they were 6 months old and real wolf “teenagers”, mischievous, rambunctious  and full of energy. 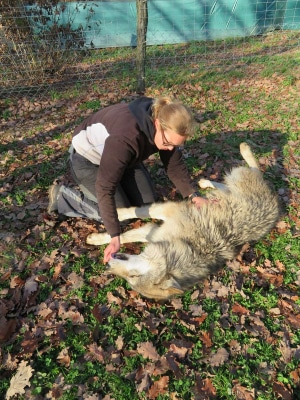 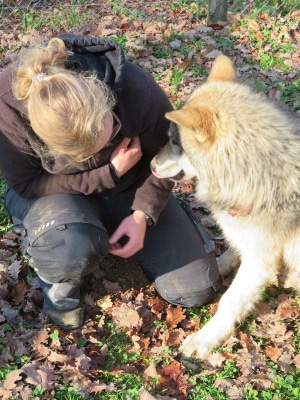 The male was Etu – Moon in the Sioux dialect. According to the Wolf Science Centre staff the young wolf seems to be the most courageous of their pups. He’s as keen as mustard and mostly the first to be involved everywhere. He’s still suspicious of Robert’s  ( Rober Beyer, the centre’s photographer ) camera, but this might be a good thing, because Etu loves to “explore” things with his teeth. However, once that the black Taima shows up ( an immature black wolf ), he immediately loses interest in everything else.

Etu was lovely to interact with. He willingly rolled over and loved a belly rub. Marleen Hentrup demonstrated her complete control over him. He was obedient like a domesticated dog, a definite pre-requisite for the work the researchers conduct with these animals. He not only responded to his name, but a number of voice and sign-language commands.

Daily, direct human interaction with these wolves is absolutely vital for the work at the centre.

Ela – Sun in Sioux – Etu’s sister, on the other hand was more reserved. Marleen Hentrup described her as very shy in the beginning. She just followed her brother around and also slept much more than Etu. Still, she was cheekier than him while playing and she now easily stands up to the others. When she wants to have a rest, she communicates it very clearly, too. In the meantime, Ela isn’t that shy anymore, and right now she seems to be the only one of the pups who doesn’t give a damn about the clicking of the camera.

For us it was amazing to be able to compare our wolves at Haliburton Forest and the animals in Vienna: of the same genetic stock, all in great physical condition, yet, through socialization and human interaction totally different in their behavior and attitudes.

On our way to the indoor facilities we passed by Wamblee. Wamblee, referred to as the cuddly monster was one of two wolf pups transferred to Vienna from Haliburton in May of 2012. Unfortunately his sister died within a few months of arriving in Vienna. She had contracted a serious infection which in the end she succumbed to. But her brother Wamblee looked great ! When looking at Wamblee many visitors see first his glowing, yellowish eyes. They form a nice contrast to his black fur.  This extraordinarily pretty, quite gracile male loves to be petted for hours by his caregivers. However, it is advisable to keep an eye on him since this rascal sometimes gets funny ideas. 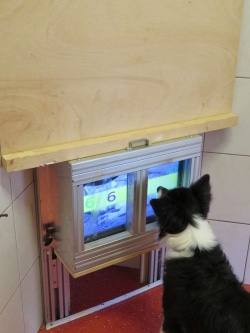 We finally were able to see the indoor facilities where most of the behavioural trials are being conducted. Tiled rooms, accessible from the outside and equipped with sophisticated, yet solid reward mechanisms, touch screens for snouts and complex door assemblies were  on display. And if we did not understand how mechanisms worked, Dr. Range’s four-legged companion Guinness was very willing to demonstrate.

Our visit to the Wolf Science Centre expanded our insight into wolf behavior, research and wolf-dog-human relationships on various levels. Dr. Range and her team have accomplished a lot over the past decade, during which they have received many accolades for their approach and the resulting research. But the Wolf Science Centre is not working in an ivory tower. As part of the wildlife park, their facilities are open to the public. Moreover, they make every effort to educate the general, visiting public of their work and the wolf ecology associated with it. Their publications are an extension of their work which is starting to reach a wider public.

Best trail conditions this season on the Wild Wood

The Wild Woods Walk was panned this morning for sn

We have snow!  We staked some lakes (very slushy)

Never know who you will meet on the trails at #Hal

🎣💥 Look who was out #icefishing at Haliburt

Mondays be like at Haliburton Forest & Wild Life Reserve With all this fresh snow, we are talking at minimum 5 inches, where else would you rather be?! That is, of course, if you are into winter! We sure are! ... See MoreSee Less

We use cookies on our website to give you the most relevant experience by remembering your preferences and repeat visits. By clicking “Accept All”, you consent to the use of ALL the cookies. However, you may visit "Cookie Settings" to provide a controlled consent.
Cookie SettingsAccept All
Manage consent

This website uses cookies to improve your experience while you navigate through the website. Out of these, the cookies that are categorized as necessary are stored on your browser as they are essential for the working of basic functionalities of the website. We also use third-party cookies that help us analyze and understand how you use this website. These cookies will be stored in your browser only with your consent. You also have the option to opt-out of these cookies. But opting out of some of these cookies may affect your browsing experience.
Necessary Always Enabled
Necessary cookies are absolutely essential for the website to function properly. These cookies ensure basic functionalities and security features of the website, anonymously.
Functional
Functional cookies help to perform certain functionalities like sharing the content of the website on social media platforms, collect feedbacks, and other third-party features.
Performance
Performance cookies are used to understand and analyze the key performance indexes of the website which helps in delivering a better user experience for the visitors.
Analytics
Analytical cookies are used to understand how visitors interact with the website. These cookies help provide information on metrics the number of visitors, bounce rate, traffic source, etc.
Advertisement
Advertisement cookies are used to provide visitors with relevant ads and marketing campaigns. These cookies track visitors across websites and collect information to provide customized ads.
Others
Other uncategorized cookies are those that are being analyzed and have not been classified into a category as yet.
SAVE & ACCEPT
Contact Us