By now (Jan 11th 2013), almost 2 weeks have passed since the two fences at the Wolf Center were cut and 4 of our 9 wolves were “released”. Within the first day, on New Year’s Day, Haida was shot and killed and, we expect at the same time, Granite, Haida’s mate and alpha female was severely wounded by 2 bullets. 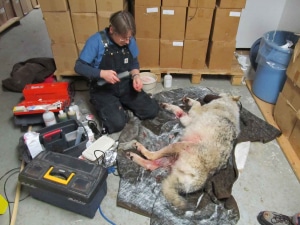 We know the latter, since Granite, against all odds, was found yesterday, 9 days after this shooting incident. She was barely alive, and two hours of veterinary attention worked wonders. When Dr. Laurie Brown, our local vet, first approached Granite lying by the roadside, where a Haliburton Forest staff found her, she did not have much hope for the wolf. But once tranquilised, muzzled and taken to the warmth of the Wolf Center, closer examination revealed that her injuries were not as severe as first thought. A lot of cleaning, stitching and injecting … and things looked up for Granite. Her heart-beat steadied and her breathing strengthened. During her ordeal, she had lost a lot of blood and liquid, some of which was now replentished through infusions. One of the wounds was infected and antibiotics were administered. 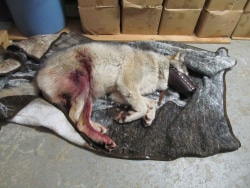 Once the tranquiliser started to wear off, Granite was taken back into the enclosure, where a sheltered wood-chip bed was set up. 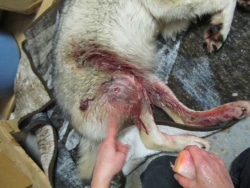 Also erected was a temporary exclosure to “protect her” against her pack-mates. As social as wolves may be, their instincts will sometimes overwhelm them and the opportunity to take out a competing pack member, which is in a weakened position, is a threat to Granite right now. With this temporary fence, she can be close, yet not together with her pack, all of which are her offspring. But we must remember that wolves can be cruel and not kind to their own species.

Granite survived the night and has moved a bit this morning. But she is still far from her usual self and will require days of recuperation. But we are hopeful that recuperate she will. 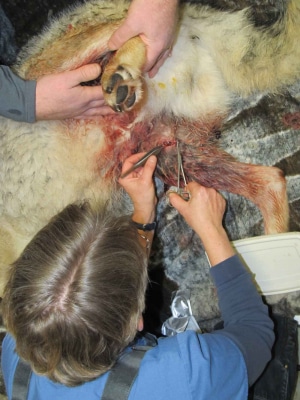 In the meantime we have tried everything to bring the 2 remaining wolves outside the wolf enclosure to the inside to rejoin the pack. So far many different devices, all live trapping, have failed. During that time the two wanderers have strayed as far as 12 kilometers away, heading south. For us that was disconcerting information. But at the same time we knew, that 12 kilometers is an hour’s gentle trot for a wolf. And sure enough, 3 days ago, they were reported 2 kilometers north of the Wolf Center … and this morning Haliburton Forest’s biologist saw, what he believed to be Haida, 100 meters from the entrance to the Wolf Center. He is the first staff who has been able to get a close look at the “black wolf” of the pair, which is still at large. 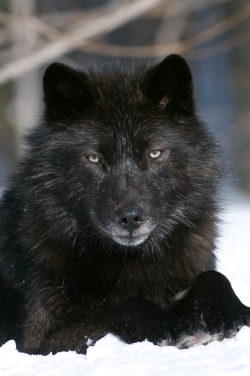 So far we always assumed that it was Haida who was shot, but it may have been Logan, Haida’s black son and look-alike. Since both animals do look very similar, we will only be certain about this, once we actually capture “the black wolf” to establish, who it is.

Tonight we will have a new, inside enclosure built, which will temporarily house the remaining 5 wolves … and eventually Granite. We had a fence built inside the enclosure before, but when the 5 inside wolves were contained, it took them mere minutes to scale 8 feet, bypass barbed-wire and get back into the larger enclosure. We are now giving them more space of app. 2 acres, surrounded by a 12′ fence, which should be able to contain them. We also hope that the proximity to Granite will calm the younger animals.
We expect that we will be able to open the gates of both fences tonight, inviting “the black wolf” and Lonestar in, by providing a juicy beaver carcass, their favourite diet.

To clarify on the events that happened, we believe very strongly and obviously have evidence to support this, that the two events of the cutting of the fences and the shooting of the wolves were two separate and unrelated events.

What this brings into focus however is the “crossfire” – to use a pun – which the wolf as a species finds itself in. Our society is polarized in its perception of wolves: While the one side is loving them, the other hates them. Both do the animal no favour and, as this drama demonstrates, can be lethal to the wolves caught in this disparity. It encourages us at the Wolf Center to continue our quest to educate about the wolf, a very important part of Canada’s wild.

Hopefully Granite, Lonestar, Haida or Luna will continue to be ambassadors of this cause at the Wolf Center!

Unfortunately the wolf saga continues, and while on some days we have better news to share, on others it is sad news: Granite, the alpha female, injured by two bullets 12 days ago, and “recovered” by us on Thursday, has died overnight.

The two outside wolves are still hanging around close to the outside of the Wolf Center, communicating with their fellow pack members inside by mournful howls in the early mornings. We are leaving food out, which entices them to hang around. In the meantime we are having difficulty getting the 5 younger wolves remaining into the separate, fenced area we built over the past days. If we try to drive them, especially the pups disappear in some of the numerous dens, so that only coaxing remains as a means to move the wolves. But the past 10 days have left them so wily, that while we can get them inside our new compound, as soon as we approach to close it, several succeed to escape … and even a cable mechanism has not worked well enough to close the fence sufficiently, until we can close it completely. These are truly frustrating and trying days, since we are left to hope for some cooperation on behalf of our wolves, who – rightly – don’t trust us like they did a couple of weeks ago … But we shall keep on trying !

Click here for the next update on this story.

Crews have been putting a push on trails the last

The Health of Local Lakes and Their Fish A free p

Happy Father's Day! Here are just a handful of ou

This Thursday, Marena gives an update on all thing

Our first Public Wolf Howl of the season is just 2

It was smiles for miles today during our annual Ca

Crews have been putting a push on trails the last two weeks. Weed wacking, leaf blowing, clearing trees and debris. We haven't been everywhere but the main trails particularly our trail running race route has been gone through:PoachersThe PassKristaGreg's Wild Woods WalkNormacNorthshore (just one small section left to leaf blow but all trees are cleared)With more to come!As always just because we've been through them doesn't mean there won't be new hazards. We are working with a forest of course. Please report anything you see to the Main Office.📸 here Ted and Dale ... See MoreSee Less