Microscopic mites living on leaves in the canopies of our forests can have a big impact on a forest, sometimes bigger then the impact of moose or deer. That’s why a research team investigated mites at Haliburton Forest in 2012.

In the summer of 2012 approximately 30 research projects were conducted by various researchers at Haliburton Forest. The project introduced in the video below was investigating the wondrous world of gall-mites, very small, sucking insects! 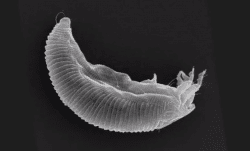 The project originated from Haliburton Forest’s Canopy Tour, which allowed researchers, especially entomologists (insect- afficionados), access into the canopy of our forests, which so far were very little understood. Apart from discovering several new species of wasps, this research also concluded that mites, which live off the juices in the leaves, have a fundamental impact on every leaf, and thereby every tree and then the entire forest environment … The mite impact is actually much more profound than the impact of the large herbivores such as moose or deer, which we commonly associate with hebivory.

These tiny mites, some hardly visible with a magnifying glass, have their own world on every single leaf. There they impact the photosynthesis of their home leaf to a degree, where the presence or absense of certain mite species may result in a 20, 30 or even 40% increase or reduction in photosynthetic activity. Obviously this has tremendous consequences on the entire forest environment, which is why we refer to the little critters as “the Mighty Mites“!

Enjoy the short 3 minute video below, which was produced by the Royal Ontario Museum in collaboration with the researcher Jessica Stokes while she was working on this project for the University of Toronto:

Swinging above the clouds: Tree Mites from Elaisha Stokes on Vimeo.

If you thought your job was tough, try being an Entomologist that studies Tree Mites. Watch Jessica Stokes dangle off ropes, hundreds of feet in the air, as she studies these microscopic creatures of the forest canopy.

Roads open this Friday, May 29th for day use visit

Who is coming hiking this weekend!? 📷 taken on

As we work our way through the three phases of re-

Cheers to the Long Weekend! Stay safe and healthy

The Cookhouse Restaurant's weekend specials are he

Can you guess who's powerful paws these are? Answe

Still fretting about what to get mom for Mother's