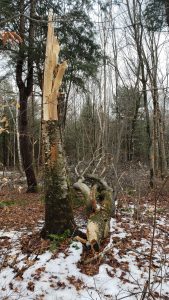 Have you noticed a patchy-red fungus growing on the bark of American beech trees, or tiny white specks stuck to the bark? This is beech bark disease. To look at, it can be beautiful, but in our forests it is deadly.

The white specks on the bark are the by-products (aka poop) of the beech scale insect, and the red patches are the fruiting bodies of the Neonectria fungus. Together this insect and fungus combination are known as beech bark disease.

Beech bark disease was found in Haliburton Forest approximately 10 years ago and is expected to kill virtually all mature beech trees over the next 20 years. This loss is devastating. Many species of wildlife (including bears) rely on beech nuts as a food source in the fall and will need to find other food sources. We also make many beautiful wood products from American beech including paddles, which will no longer be possible.

Despite the bleak outlook, at Haliburton Forest we are being proactive. We are doing research projects that explore how to manage forests that have been infected with beech bark disease. We have adapted to focus on harvesting the areas with high beech populations, using methods that will encourage the regrowth of as many other tree species as possible. By increasing tree diversity, we increase the resilience of the forest to future pests and diseases, and provide a variety of other food sources for wildlife.

This dusting of snow has us dreaming of winter act

A beauty for the ages. The Wolf Centre is current

Who’s hit up the Cookhouse with @truss_foodworks

Emily is reporting for duty on the Thursday Update

Balance The Wolf Centre is currently open to the

The first little snowfall of the year has us excit

Better late than never. #fishyfriday ?? Over the l

We have a lot of different forests in our neck of